Rejection is sometimes difficult to deal with, whether it’s by a lover, a friend, or a publisher. Obviously being rejected by a friend or lover hurts more, there are more ramifications to do with your life than a rejection from a publisher, but they all have something in common: they can be perceived as an attack on the self.

What I’ve learnt as a writer is that with each new project I invest a lot of myself in the writing, drawing on past feelings and experiences in order to authenticate my characters and their actions. You don’t have to be a murderer to understand murderous motivations, or be widowed to express feelings of loss. That’s where our greatest gift, the imagination comes in. It takes what we already know, projects it onto a new canvas and amplifies colour, sounds, emotions.

Last summer I spent time in Italy researching for a poetry project, immersing myself in sounds, smells, architecture, botanical gardens, museums, art galleries and streets. I wanted to re-create the Renaissance and get inside a man’s head – Nicholai Steno, father of geology. I looked at everything with an eye to seeing what he would have seen and tried to understand his deep faith, a faith that would take him from an early career as an anatomist and fame in the Medici court, to a pauper’s death as a bishop in Germany at the age of 48. On the way he discovered that the history of the Earth lay in its crust.

Steno’s story is one part of the project, which grew legs and became the story of the Earth itself. I completed the writing and set about trying to get it published, encouraged by my mentor, Jim Bennett. I’m still trying. It’s received positive feedback from one publisher but who is going out of business. A couple of others haven’t even acknowleged receipt and one sent a quite patronising rejection that undermined my confidence.

I know that rejections are part and and parcel of being a writer and I’ve had a lot of them. I’ve learnt not to take them to heart and to keep going. I think the difference here was that I was so excited about creating something different with the haibun form that I had invested too much into its success and was vulnerable because I’d moved out of my comfort zone and taken a risk. However, this is when we learn the most: to take disappointment and turn it into a success.

So I’m back on the horse, sending it out to publishers and at the same time getting on with other submissions. Four of my poems are included in issue 2 of The Poetry Kit’s new online magazine Lunch and another poem has found its way into Dove Tales’ peace anthology Bridges or Walls? I’ve been funded for a year to work as social media secretary for Autumn Voices, a blog that seeks to promote and showcase writing for people over 60, so life is good. Very, very good. 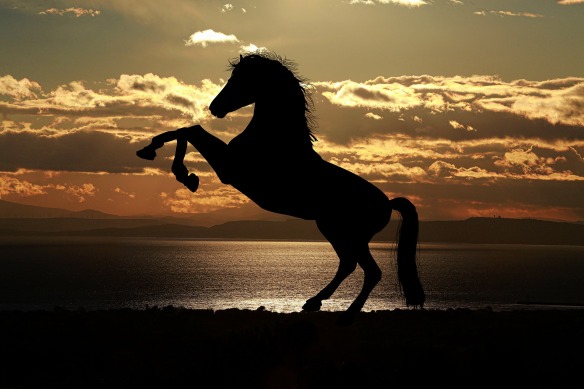 1 thought on “Getting Back on the Horse”